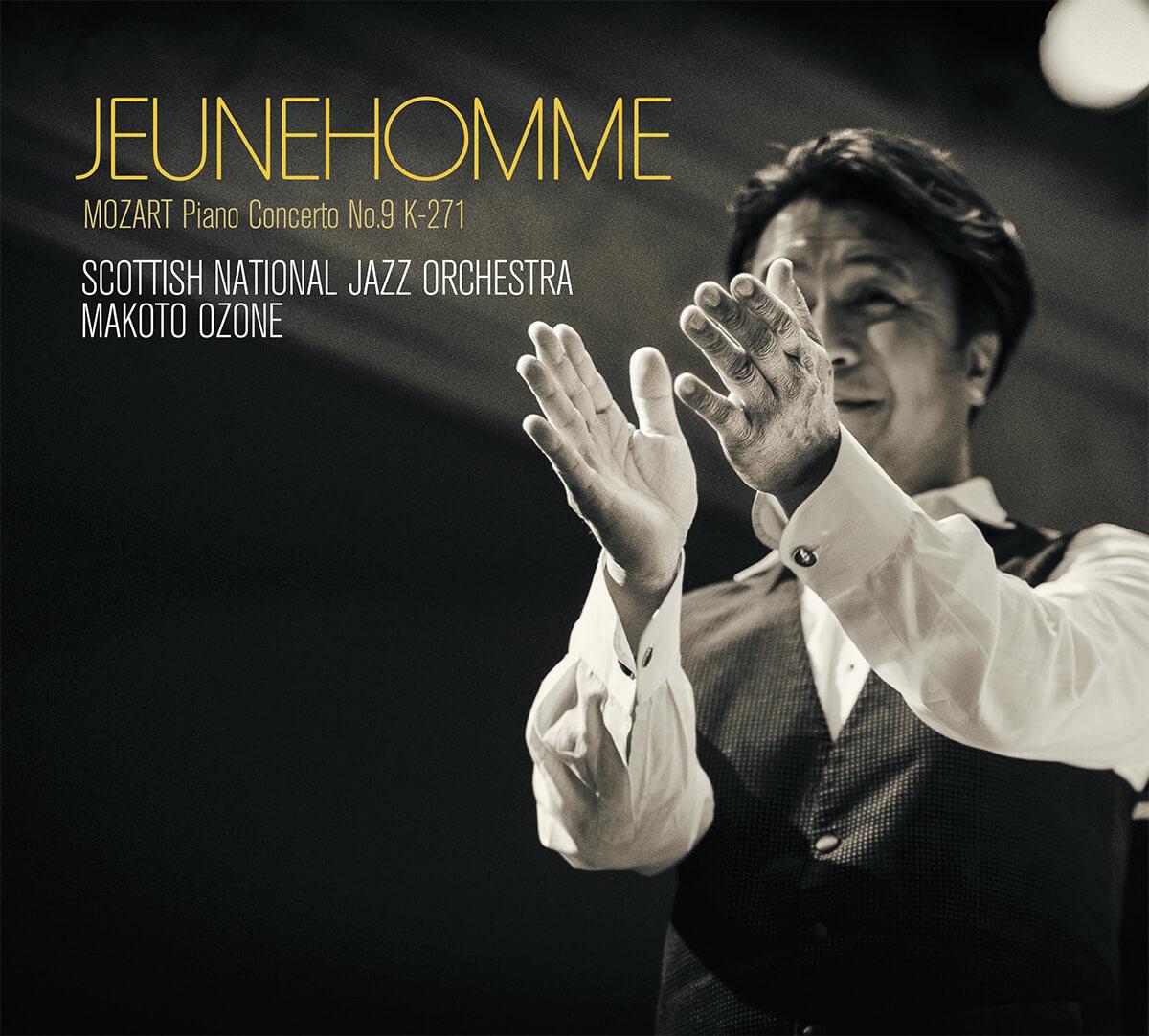 The SNJO are delighted to announce that our latest CD,  JEUNEHOMME featuring pianist Makoto Ozone has just been released on the Spartacus Record label.

This universally popular work, known familiarly as Jeunehomme is here re-imagined by a daring soloist in Makoto Ozone, an exceptional big band in the Scottish National Jazz Orchestra (SNJO), and a courageous leader in director Tommy Smith.

Mozart’s devotion to melody and solo virtuosity speak to us from another age, but the ambition and exuberance of this particular composition are instantly recognizable to jazz musicians. Certainly, it contains all of the breath-taking piano improvisation inherent in a concerto that seems designed to impress, dazzle and delight.

Our understanding of Mozart’s 9th Piano Concerto may also be a little clearer if we consider its colloquial title to be a misnomer. It’s been suggested that Jeunehomme is, in fact, a mistranslation. Louise-Victoire Jenamy was a young pianist who first made Mozart’s acquaintance in Vienna sometime around 1773, and it’s widely proposed that Madame Jenomy (sic) commissioned K-271. Whether Mozart was smitten or not, we will never know. Nevertheless, the excitable dialogue between piano and orchestra, and some precipitous cadenzas, suggest that the composer was in the mood for some ardent showmanship.

Makoto Ozone is a virtuoso concert pianist who brings an agile jazz intellect to his arrangement of Jeunehomme, and he approaches the piece very much on his own terms. Speaking on 26th April 2014 at the Queen’s Hall in Edinburgh, Ozone explained that Mozart came immediately to mind while discussing jazz arrangements of suitable classical pieces with Tommy Smith.

“There is a lot of joy in Mozart’s music and he was a great improviser”, says Ozone. “…and, of course, jazz is all about improvisation.”

It’s frequently noted that the opening passage of Jeunehomme is unusual in the way that the soloist makes an early entrance. In this jazz setting, the impetuous nature of the youthful Mozart seems even more pronounced. The piano bursts impatiently in on the scene set by an assured jazz orchestra that swings comfortably into the composer’s elegantly economic motif. None of this would be possible without considered forethought from the orchestrator.

Ozone observes that, “The biggest challenge to turn it into a jazz piece from Mozart’s original music was how to use the drums, because Mozart didn’t have drums back then. Although I think if he did, he would be swinging very hard!”

In the second movement, the potency of the tango is brought to bear upon Mozart’s pent-up energy and barely suppressed emotions. Moreover, Ozone chooses to hear the musical invention in Mozart’s writing that seems to foreshadow the emancipation of a jazz age yet to come. On a personal note, Ozone describes the second movement as profoundly emotional.

“Every time I play the second movement….I’m thinking of my father, and therefore of Mozart”, states Ozone with disarming candour. “You see, Mozart really loved his father very much, but at the same time his father was very tough on Mozart about the music. There is a lot of love/hate and mixed feelings in it.”

Mozart wrote his 9th Piano Concerto in 1777 at the age of twenty-one, and the indirect reference that Ozone makes to a coming of age constitutes a legitimate interpretation of Jeunehomme.

In an effusive third movement, Ozone’s Jeunehomme reconciles Mozart’s vaulting ambition with the fearlessness of jazz to create 21st Century music that leaps from the pages of another era. This part of the task was, according to Ozone, relatively straightforward.

“The third movement was very easy because the figure starts with piano and a line of all the ace notes so it sounds like bebop already, and I thought ‘I’ll be darned’. He (Mozart) was already doing bebop three hundred years ago!”

The Scottish National Jazz Orchestra are noted for a sense of adventure and they cross timelines, cultural boundaries and musical borders with alacrity. The SNJO repertoire has consistently sidestepped divisive thinking and they’ve earned a reputation for excellence to match their versatility and bold choices. Jeunehomme is undoubtedly a fresh test, but there was little doubt in anyone’s mind that this orchestra would acquit themselves admirably.

Tommy Smith remarked, “It was a challenge for the orchestra because we had to play some tango and different styles of jazz, but we also had to do something that we’d never done before, and that was to interpret the classical rubato time where Makoto with his own feeling would slow or speed up a phrase, and we would have to try to follow him…rather like the cat chasing a light thrown up against a wall, we were following this light as much as we could.”

The positive response of critics and commentators to the live performances of Jeunehomme in a jazz style suggests that the orchestra caught the light. Naturally, the principal soloist singled out for particular praise was Makoto Ozone who “moved between classic and contemporary jazz idioms in dazzling fashion.” Others who shone especially brightly included Smith on tenor saxophone, Ruaridh Pattison on soprano saxophone, trombonist Chris Greive, trumpeter Tom Walsh, bassist Calum Gourlay and drummer Alyn Cosker. The contribution of the latter was rather dryly described as,“something not often heard in a Mozartian context”.

“… a clever and sympathetic crossover project.”