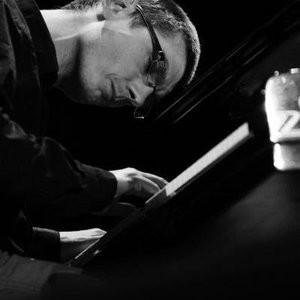 I first met the talented French pianist Loïc Dequidt in 1994 after being invited to Lille by François Schmitt, an old friend who had helped me get a foot into France. A few years later Loïc invited me to Paris, rue Lepic, Montmartre, Paris to play a week with him and his friends in 1997. My initial surprise was that all the musicians had memorised some of my music from my albums Beasts Of Scotland and Misty Morning & No Time, so immediately, I was blown away as I’d never experienced this before. All the guys were great characters; both Christophe Hache (bassist) and Loïc had perfect pitch, and the drummer Xavier Frathély was crazy and funny. Christophe had a photographic memory and could recall any song he ever heard, and in the key, he heard it, like a Beatles song on the radio, and a few days later, sing it note for note, rhythm by rhythm; what a gift. All of this was astonishing to me, as I had to work hard to develop my aural ability over many years. We all got on like a house of fire, and I had so much fun playing any note I felt like, as I knew it would be respected and supported. Over the years, we played in Paris, Lille, Arras, Toulouse, Brussels, Liège, Yemen, Sweden.

One time we had a concert with the drummer Jacques Mahieux from Guise, who was 20 years older than me. He knew I was learning French, so he taught me the word for stick and demonstrated it in his inimitable Mahieux fashion by improvising a drum solo using ‘la baguette’. With bread and crust flying everywhere all over his drum kit while laughing his ass off, he shouts to me, “you get it? baguette means stick!”

The French people taught me a thing or two about cheese, especially the famous ‘Vieux Lille’, which most people may require to hold their nose to eat.

Loïc was an intrepid traveller and loved to mix cultures and music. He managed to procure five invitations from embassies in Yemen; the British, French, Italian, German, and Yemen. Each ambassador was permitted to choose one musician from their country and bring them to Yemen for one month to tour and collaborate with indigenous musicians. I was lucky and selected through mediation from Loïc. Having travelled to numerous dangerous places like Pakistan, Kazakhstan, Romania, India, Sri Lanka, and Israel, I was excited to visit a country where music was banned for decades, for its evil nature is rooted in temptation, and where men could have four wives and lots of trouble.

When I arrived 3,880 miles away from Scotland, as usual, the heat hits you like a punch of dusty sound waves all over your body and into your lungs.

Our hotel in the country’s capital, Sana’a, was made elaborately from mud, scattered by very low 4-foot door frames, which creaked your back every time you had to stoop to your room and only fragments of coloured glass that lit up the sandy floor with life, there were no clear windows, for fear of someone seeing something.

Surprisingly, the coffee in Yemen served in the hotel was Nescafe from a can of powered granules; ironic in a country where they produced coffee beans of excellent quality and for 200 years before anyone else in the world but was heavily exported until the war of 2015.

The first port of call was to rehearse with all the musicians every day for a week to absorb each other’s music slowly, in the Institute for Women; a pleasant stroll from our mud abode, along the dried-up river bed, and through pencil streets filled with kids riding two-wheeled tricycles. A loud whirring generator provided our electricity outside many floors below, which sometimes gave up. The heroic musicians of this international ensemble to bring the first music to a country that endured silence for so long included 5 Yemenis, Rouweida Al Haj (voice), Jaber Ali Ahmed (oud), Ali Al Assadi (oud), Adel Hassan Othman (darbuka), Schoubeily Mohamed (voice), bassist Furio Di Castri (Italy), drummer Oliver Steidle (Germany), Loïc, and me.

The Yemeni’s found our music challenging to play, esepcially 4/4 and in the centre of our pitch, while we were tested by odd metres and quarter tones. Eventually, after a week of music and meals on the ground, we were ready to play for the people.

Through my first few days in Sana’a I became very sick with food poisoning, probably because we all ate together, legs crossed on the carpet, using our hands and sharing communal plates of local food. It was maybe the worst belly ache since my lunch from Pierre Victoire in Edinburgh’s Victoria Street in 1989; although, the Dehli belly in India in 1993 hit me like a bolt of lightning too.

During the tour, the German drummer, Oliver Steidle, said to me, “You know what Ali said to me today?” “I really admire what Hitler did to the Jews during the 2nd World War.” Oliver said, “how can I possibly answer such a crazy comment; I’m a young German, a pacifist, what the fuck is wrong with this guy?”

Near the end of the tour in the south west part of the country, we were delayed on the runway, we were forced to sit in the Aeroplane, awaiting new passengers to board in the city of Al Hodeïdah, situated in the southwest, directly across the Red Sea from Ethiopia. Sitting next to me was Ali, and he said to me, “I think I’ll play a song to pass the time”, so he and Adel took their instruments from the overhead compartments and started to play a beautiful Yemeni folk song.

Passengers around us seemed to enjoy the singing and playing, when all of a sudden, there was a commotion at the back of the plane, caused by three identical looking angry men with long beards and hcheckered head scarfs, who began yelling and shouting in Arabic, ‘music is banned and fobidden, you cannot play music!” An argument ensued between Ali and them; voices were raised, which caused much anxiety amongst the passengers. Soon heavily armed police were boarding the plane and quickly restored order and silence. After they left, Ali stood up again and walked to the back of the plane to confront the three blokes for a second time; to my astonishment and surprise, they said nothing in retaliation; and Ali returned to his seat next to me. I asked Ali, what did you say to them? He replied, “I told them, God created all the birds, and the birds sing so beautifully. Are you going to stop them making music too?” Perhaps Ali’s courage came from his love of music or the fact he had to fight for the right to make music in Yemen for so many years. Honestly, imagine a world without music- it would be like a night sky without stars. Later, Ali did confess that his water bottle did not contain water but Gin.

Standing in 2004, on a rugged sandy hill in Southern Yemen, eleven years before the civil war, the night began to sing its dark melody with a twitchy audience at my feet; forgotten oblivious scorpions to Yemeni citizens now. I screw my head and peer back at the wondrous 16th-century city of Shibam I’ve just strolled around; stunned by the curvaceous walls towering overhead shadowed by gas-light, reformed earth, goats, and people living their lives. It’s easy to be in awe about this unique magical place and its gentle people, the foresight of its architects, and the ingenuity of earlier Yemeni citizens and spice travellers dreaming up the world’s oldest protected vertical metropolis in this desolate desert area known as the empty quarter, within the veins of a baked river bed. It’s so damned awesome and impressive that these seven-story ancient mud-scrapers surrounded by a fortified wall, in the jawbone of the Arabian plateau, the Wadi Hadhramaut wilderness ever came to be.

Since 2015 when Yemen erupted into a violent civil war causing untold suffering, human catastrophe, and brutal bombing supported by a host of countries, this historical place, Manhattan of the Desert and others are listed to be in danger according to the World Heritage. Why do we list sites of importance? And what about the people?