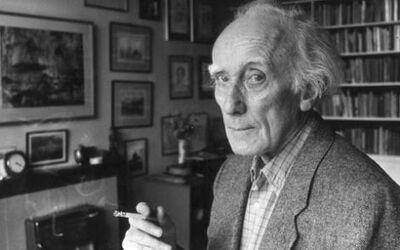 It was in June 1994 I had the great pleasure of meeting the legendary poet, Norman MacCaig, in his Edinburgh flat. I had heard him read his poems at the St. Magnus Festival in Orkney in 1993 in a small wooden floored room packed with people; I was giddy with excitement to experience the atmosphere of pins dropping. He was and still is, to this day, my favourite poet. No one surpasses MacCaig’s wit, simplicity, directness, and genius. Anyway, I arrived at his place with a young bottle of Bunnahabhain as a peace offering, as I had heard MacCaig could be difficult and ate people for breakfast, but I guess that frontagé must have been created for the acidic critics and wannabe writers.

After being gently cross-examined by him about my favourite poems from his 1990 collected poems, which I brought upon myself, to change the subject, I asked if I could play him a lament on my saxophone, he politely gave the go-ahead. The sound of my tenor echoed through shadows in the corners of his high ceiling and off the smokey carpets dissipating across the tacky linoleum in the next room; the neighbours must have wondered what MacCaig was doing. Afterwards, we had a dram and agreed to collaborate on Misty Morning & No Time, inspired by 14 of his poems. Before I left Norman’s flat, he signed my book of his collected poems, “For Smith, for the great pleasure of your company and your saxophone – Norman”. Misty Morning & No Time was composed in the months following my encounter with MacCaig and recorded on 19th and 20th of December 1994 at Castle Sound Studios in Pentcaitland and released on Linn Records in 1995. The cover artwork taken by photographer Thomas Joshua Cooper, was of a waterfall in Iceland called Gullfoss, the Golden Falls. Although I had been to Iceland in 1993 and experienced some of its splendour, it wasn’t until 2019 that I would stand on the edge of these falls and witness the power of their gravity. During the 1995 UK tour of Misty Morning & No Time, we invited actor Adam McNaughtan to read the poems at our concert in the Citizen’s Theatre, Glasgow. His deep, gravelly voice gave Norman’s poems epic proportion.

When MacCaig passed away on January 23rd 1996, I was shocked. I attended his funeral along with everyone else from the esoteric artistic circles of Edinburgh’s creative conscience. It was the most extraordinary celebration of a fallen poet I had ever experienced; it was also my first; although, I was about to experience many more passings in 1996. While the priest was waffling some impersonal reverb around the dark church, his close friends were whispering that they could hear him knocking inside the coffin, which was placed in the middle of the aisle, because the service had a hint more religiousness than a Zen Calvinist could have wished for. However, as soon as some of the many poets, like Alastair Grey, Tom Leonard, and Liz Lochhead ascended the podium of grief, all joy broke loose with laughter, stories, and poetry; a hell of a funeral service for a hell of a poet, and everyone left smiling remembering a visionary of Scottish poetry.